This We Walk route is two walks in one! You can walk or bike the Springwater Corridor to Leach Botanical Garden and then walk the beautiful grounds of this Portland gem.

First a little back story, courtesy of LeachGarden.org

“In their wills, John and Lilla had specifically stated that their home and property was to be given to the City of Portland as a botanical park and museum. One condition was that, if the City did not take action within 10 years, the property was to belong to the YMCA. So in 1980/81 the YMCA contacted the City and began to pursue their potential acquisition. Friends and neighbors who had known the Leaches were fearful that the property would be sold and the garden lost forever. A true grass-roots organization was formed – and Leach Garden Friends was born in 1981/82. Public meetings were held and the City was urged to save the property and to develop its potential. Finally, because of the great effort on the part of so many people, the point came when the final decision to retain the property had to be made by the City of Portland.

At that time, Charles Jordan was Commissioner of Parks. While a great many people – local neighbors and acquaintances, horticultural and botanical groups, nurserymen and citizens in the area, and many others who knew of Lilla’s botanical discoveries – pushed and pleaded for action, it did not look hopeful. In fact, the decision to NOT keep the property had been made, and Commissioner Jordan was about to sign the release document. However, it is said that he stated to a staff member “I’ve never been out there, so I think I should go look at the property before signing off on it.” Well – Mr. Jordan did pay a visit and it was reported that he said that it was a “little jewel” and “we can’t let it go.”

“Model the way – you never know who is watching and wanting to be just like you.” – Charles Jordan

The routes to Leach Botanical Garden

Option A: This trail can take you all the way to Powell Butte or farther if you really wanna walk! Once you hit Foster, you take it to 110th Drive and onto Brookside which will lead you to Leach!

Option B: This also leads to Powell Butte and will take you straight to 122nd and down to Leach Botanical Garden!

DISCLAIMER: Starting at Brookside Road, this is the one stretch of the walk in which you will NOT see sidewalks. You will go up a bit of a hill and turn right into a wooded neighborhood. You will see sidewalks once again when you reach the corner of SE 117th Place and SE Brookside Drive. The street ends and it will take you into another neighborhood with sidewalks.

At this point, you will continue onto Brookside Drive and pass the sign for Brookside Wetlands.

DISCLAIMER: The intersection of SE Brookside Drive and SE 112th Avenue is NOT very pedestrian friendly. Cars move fast and there is not a convenient crosswalk to make it to SE Cooper Street.

Once you reach the bridge at this intersection, you will not cross the bridge, but you will go left onto Cooper Street. You will see a sign that says No Outlet but this street will take you to the Foster Floodplain Natural Area where there will be a beautiful, calm path through the floodplain area!

Once you make it to this trailhead, you will take the path all the way to Foster Road where it meets the Springwater Corridor. This intersection is noted as Option A.

From here, you can cross with use of the crosswalk onto the other side of Foster Road and start walking along the Springwater Corridor.

DISCLAIMER: From this point until you reach SE 111th, there is a large encampment you will see as you walk along the Corridor. Please remember to be respectful if you choose to go this route as people may be trying to sleep or relax in an area where they feel safest to do so.

You will go straight on this trail until you reach SE 122nd Avenue, in which you will go right and it will start to take you back to Leach Botanical Garden. Once you make it back to Foster via 122nd, continue straight and the Garden will be on your left.

The entirety of this loop is approximately 2.86 miles long. It is fully accessible (contact Danielle at 707.477.1641 in regards to the first set of stairs as the employees at Leach may open a gate so wheelchair/walker uses may park on the lower level of the park), yet as the disclaimers mention, there are some areas without proper pedestrian infrastructure. 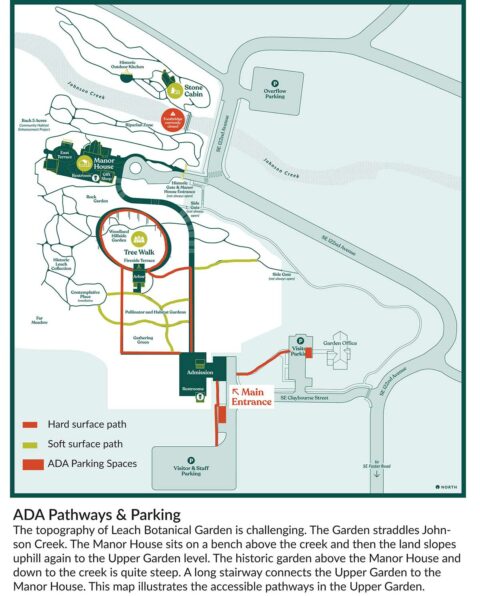