After years of advocacy, ownership of 82nd Ave--formerly known as Oregon Highway 213--was transferred from the Oregon Department of Transportation to the City of Portland. With that transfer came $185 million dollars to improve the road. For years, this highway served as the main north-south corridor for vehicles and freight on the east side of Portland. Over the decades, Portland grew to the east and subsumed the highway while low density residential and commercial activity grew along the corridor.

After all this growth, 82nd Ave is now the geographical center of Portland. It is also the most culturally diverse area of Portland and is home to bus line 72, the highest ridership route of the entire Trimet system. After years of neglect, however, the road deteriorated, pedestrian access became more and more dangerous, and injuries and deaths along the corridor grew in numbers. With the jurisdictional transfer complete, Portland has an opportunity to make 82nd Ave a safe, thriving corridor for all.

Funded by the American Relief Act, Oregon Walks is tasked with building a community-led coalition that will reimagine 82nd Ave. The coalition will focus on three areas:

Working in partnership with Asia Pacific American Network of Oregon (APANO), Unite Oregon, and Verde, Oregon Walks is excited to build a thriving coalition. Recognizing there are limited funds that cannot pay for all the desired investments, this coalition will be positioned to help the City of Portland prioritize current and future investments to best meet community needs.

If you are interested in knowing more and/or joining the efforts, contact Zachary Lauritzen, the 82nd Ave Coalition and Project Manager.

This week the 82nd Ave Coalition teamed up with Multnomah County Commissioner Vega Pederson, State Representative Pham, Metro Councilor Hwang, and Portland Bureau of Transportation (PBOT) staff for a walk along 82nd from Foster to Bybee, over to Glenwood Park, and back.

It was an opportunity to discuss some of the coming infrastructure improvements as well as goals for future investment as PBOT works on Building a Better 82nd Avenue. Follow the link to learn more about the project and take their survey.

If you want to become more involved with advocacy along 82nd Avenue, join our coalition! We are raising the community's voice as decisions are made the impact 82nd Avenue. If interested, email Zachary at zachary@oregonwalks.org 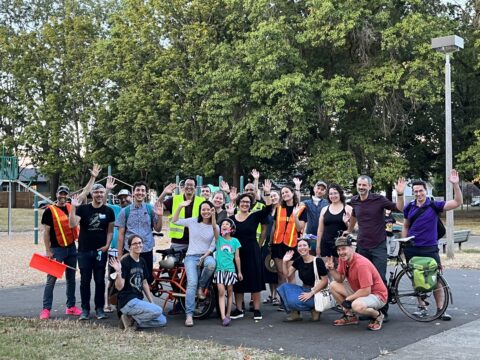